We use cookies on this website to improve how it works and how it’s used. Read our Cookie Policy for more information.
I understand
Presented By Peter Hudson with Building 180 and La Machines | London Premiere

The last rite of passage on the way to the afterlife.

Monumental and mesmerising, Charon is a gigantic 32ft high rotating zoetrope with posed human skeletons mounted on its inner edge, fully powered by you…

Each night, bathed in dramatic light and sound, teams of volunteer operators will animate the mythological ferryman, who in Greek myth rowed the souls of the recently departed across the river Styx.

Originally created for Burning Man, Peter Hudson‘s extraordinary, kinetic installation will take over a new festival site in Royal Docks, bringing the spirit of Nevada’s legendary festival of art, community and self-expression to East London for the first time.

Charon is free to attend.

More information on how to attend will be published soon.

Follow GDIF on social media or sign up to our newsletter to be the first to hear about Charon. 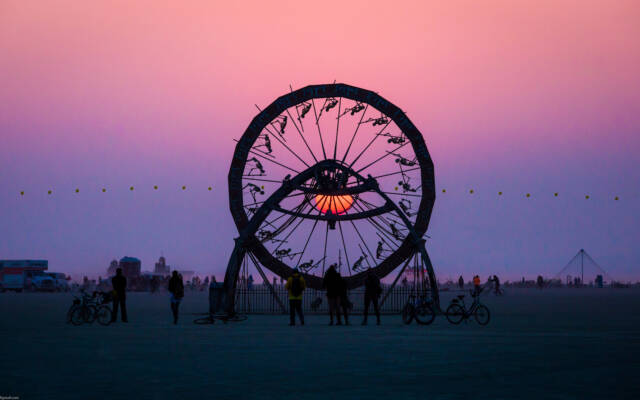 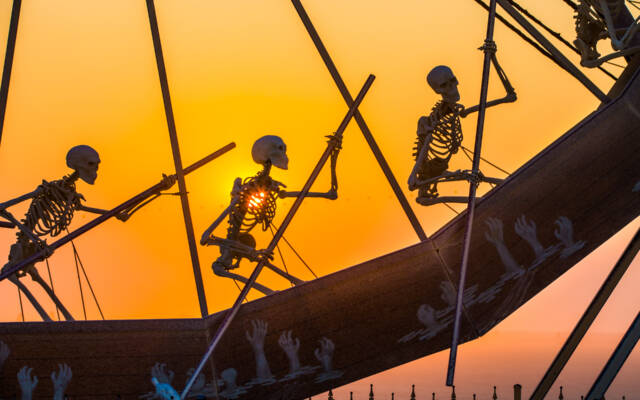 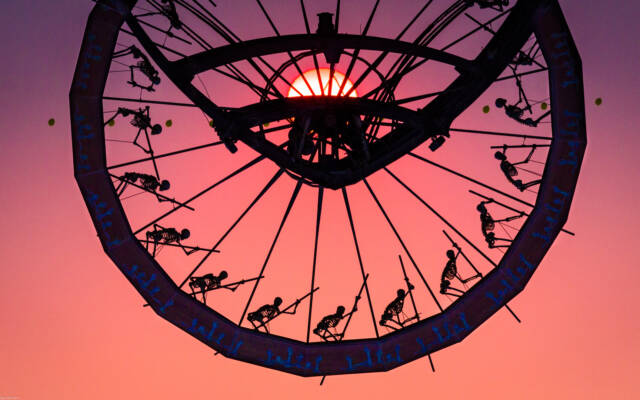 Raised in Ben Lomond, CA and based in San Francisco, Peter Hudson, aka “Hudzo” self-proclaims, “I am the director of the shortest (in time), yet tallest (in size) 3D animation shorts, realized as life-size, 3D stroboscopic zoetropes.” Hudzo channels his technical and set-design expertise, curiosity, and creative passion into life-size 3D stroboscopic zoetropes. Hudson has spent 30 years in the world of stage and set design, working with the San Francisco Opera, Ballet, TV and film. In 2000, Hudson began creating his own larger scale sculptural installations, debuting his first major installation, Playa Swimmers, at Burning Man. In 2001, his work Possession garnered international attention when it was featured on the cover of the Italian edition of Rolling Stone magazine. Hudson’s work continued to evolve into 6 stroboscopic zoetropes: Sisyphish, Deeper, Homouroboros, Tantalus, Charon, and his most recent piece, Eternal Return.

Charon is supported by The Royal Docks. The Royal Docks Team is a multi-disciplinary team that brings together officers from across the Greater London Authority, the London Borough of Newham and the London Economic Action Partnership.

Home to London’s only Enterprise Zone, the Royal Docks is one of the most significant regeneration projects in the UK. The team was established in 2017 to help deliver the cohesive transformation of the Royal Docks into a vibrant, mixed-use destination with culture and community at it’s heart.